All Kyocera devices are Japan Made. Our phones come with a Standard 2-Year Manufacturer’s Warranty.

Public safety and private security organizations face many different types of critical events that can threaten the safety of those involved. With so much on the line, improving communication, coordination and situational awareness can improve response times and effectiveness. That is why Visual Labs and Kyocera have partnered to provide a robust mobility solution that goes beyond traditional body-worn cameras and creates a unique new solution based on a fully-functional, ruggedized Android smartphone. Traditional body-worn cameras are single-function devices that must be docked to offload video content. The Visual Labs software and the wide-angle action camera of Kyocera’s smartphone combine to provide the latest technology and a robust feature set.

Security and policing at the NFL’s biggest game in February 2018 was a priority for law-enforcement officials in Minnesota. In 2016, Minnesota’s Washington County Sheriff’s Office became the first agency in the state to use the Visual Labs/Kyocera solution, which allowed them to use their Kyocera mobile devices to not only instantly communicate but also operate as body-worn cameras.

“We evaluated a lot of different systems,” said Commander Andrew Ellickson of the Washington County Sheriff’s Office. “Basically it’s everything the Sheriff wanted in one smartphone. Once we found this, we knew that was the direction we wanted to go.”

While the software from Visual Labs turns the smartphone into a body-worn camera, the device also serves as a digital camera, audio recorder, telephone and GPS unit, and has apps for scheduling, accessing County policies and more. 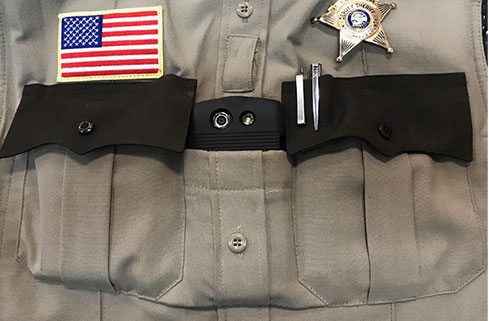 With a large population of approximately 210,000 residents,the city was granted federal funds to implement a bodyworn camera solution to meet its public safety needs.After extensive research and a detailed RFP process involving 8 possible solutions, the combined solution from Visual Labs and Kyocera was chosen as Fontana’s body-worn camera solution for all of its 200 officers. Within 30 days – after individual and group training sessions were done and a department-wide body-worn camera policy was put into place – the smartphone body camera solution was fully deployed. 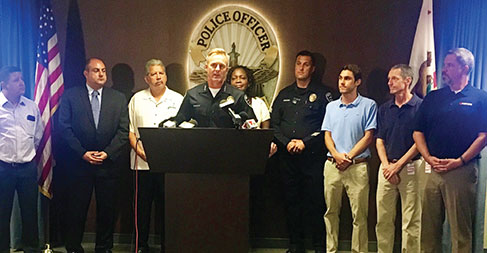 In order to provide transparency and documentation of interactions and encounters with citizens and inmates, the Yuma County Sheriff’s Office decided to implement a body-worn camera solution. To be useful in criminal cases and community relations, the Yuma County District Attorney’s office desired a solution that could archive both audio and video evidence. Over a year of research and field testing went into the evaluation of various BWC systems, and what they found was the unique combined solution of Visual Labs and Kyocera. Knowing that mobile technology continues to evolve, the agency felt that
the smartphone software-based program could easily be implemented with the deputies’ agency-issued phones.The biggest benefit they found in the combined solution was that it was not simply a stand-alone camera, but also provided GPS capabilities to analyze geographical data that could help determine the effectiveness of patrolling certain “hotspots” in the region. With Kyocera’s affordable, rugged smartphones funded by a Federal grant and the low cost of the Visual Labs application, Yuma County became the first of now many public-safety agencies in
Colorado to implement a smartphone-based BWC solution.